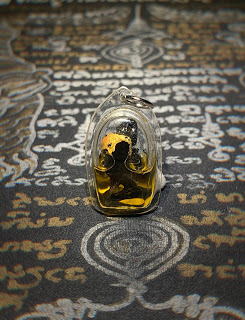 Legends Of Chu Chok:
Chuchok’s story comes from Wesandorn Jatarka, the last life of great worthiness or so-called Poramat Barami (the ultimate worthiness) of the Buddha. At that time, he was born as Prince Wesandorn. It was a preparation for his enlightenment in the future. Wesandorn is one of the stories of the former incarnations of the Lord Buddha. There are 13 chapters. It is believed that listening to all 13 chapters in one day brings about great merit.

Chuchok’s story is mentioned in chapter 5 onwards. Those who make a donation for the sermon of Chuchok’s story will be born in a high-class family, own many assets and have rhetoric. They will have a handsome husband and a beautiful wife. Also their children will be cute and obedient.

According to the sermon, Chuchok was a Brahmin living in Kalingkarat Province. He went about begging donations and was able to collect a small fortune. He was very stingy and knew how to save and gradually saved his money until he had 100 Kasap. At that time, he was considered as a rich man. He took all money to entrust to a friend who was also a Brahmin, and departed once again to travel the country begging.
As for his friend who was looking after the money, he grew poorer, so he took Chuchok’s money which he had entrusted to him, and spent it all. When Chuchok remembered, he returned to claim his money. The Brahmin couple did not have any money to repay him so they offered their daughter, Amittada, to be Chuchok’s wife. Amittada was a young beautiful girl. She told Chuchok that “My life belongs to you. From now on, you can keep me as a maid at home or as a wife. I can sleep at your feet and do everything for you.” It is said that Chuchok had a very beautiful wife, in that life, because he had offered a cloth with a bunch of lotus flowers to the Lord Buddha in a previous life.
Whereas Amittada had offered a blooming lotus that she had smelt with her own nose before giving to to the Lord Buddha. As a consequence she had an old husband, Chuchok. Chuchok was a very old and ugly man. When he took Amittada to his village named Tunawit, Amittada cared for Chuchok her husband in the proper manner. Many Brahmin men in that district became dissatisfied with their own wives because their behaviour did not match that of Amittada. All the Brahmin women were cursed because of Amittada.
As a result the women went to curse her in return. When Amittada had gone down to the waters edge she was cursed and repelled. The Brahmin women cursed and mocked her, saying that her husband was ugly. She felt ashamed and heartbroken, and returned home. She told her husband Chuchok the events of that day and said that from now on she was not going to work; Chuchok said he would have to do the work himself, but Amittada would not accept that because her family had never used a husband as a slave. Finally, she asked Chuchok to find a slave for her otherwise she would not live with him.

Made Blessed Empowered By Ajahn Rit
阿赞力制作开光加磁
Additional Blessing By LuangPhors
再让多位高僧开光加磁
Everyone Please Do Some Charity,Temple Donations, Or Help The Needy After Windfalls Or Receiving Blessings 请中奖后做点善事比如捐庙或慈善

Want To Know What Is Best For You ? What's App Us Now

Going Thru a Rough time?
Problems you cant solve?
Feeling that the whole world is crashing down on you?
Just need that Helping hand?
Want Your Life To Get Better?

Not Sure Whats Suitable For Your Situation?

Drop us an Email we would then recommand you the most suitable amulet for you to the best of our knowledge.

We can and will delivery worldwide.Payments method could be arranged

Coffin , Medicine , Social Welfare And Various Aid To The Needy

Provide Food For The Needy

Donate To The Children's Society Care For The Future

Whatever you want to do, do it Today!

Whatever you want to be, work towards it today!

Whatever you want to have, go for it today!

When it comes to the important things in life, dont wait till tomorrow.

Tomorrow may not come!

No great man ever complains of want of opportunities.

A wise man will make more opportunities than he finds.

There are two things to aim at in life; first to get what you want, and after that to enjoy it. Only the wisest of mankind has achieved the second.

We Are A Certified Company

We Are Paypal Verified